This past Friday, I took my high school one-act play students to Bandera, TX.  On the way there, we saw bluebonnets in bloom between Llano and Fredericksburg.  I thought that those blooms were way ahead of our personal bluebonnets, but no, not at all.  Saturday afternoon, we drove around the Mountain Pasture, and there they were, just beginning to peak their little blue bonnets out of the green plants.  Above and below are photos of the first ones of the year here at our place in Central Texas.  We welcome you, bluebonnets and spring! 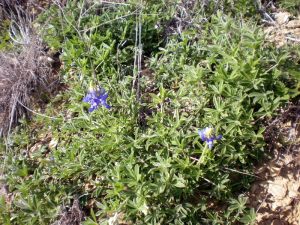 The bluebonnet is the state flower of Texas.  The blossoms resemble the bonnets of pioneer women.  We have an abundance of the plants here at the Mountain Pasture.  Summer before last, a friend gathered some seeds from our prolific plants.  She planted them.  They haven’t come up.  She is distressed.

I was reading about bluebonnets today, and the success rate in planting seeds is 60%, and sometimes they don’t produce blooms for two years if they do come up.  The plants are survivors, and they are very careful about protecting themselves.  It is best to plant the seeds in the fall in soil that has good drainage.  Some recommend that a person scar the seeds before planting them and barely cover them with soil. There are many recommendations on the Internet for planting bluebonnet seeds.

Sheep and goats eat bluebonnet plants as quickly as they poke their heads out, but cattle don’t care for the plants.  I think we’ll have a fairly good crop this year.  Below are some photos of the current state of the plants at the Mountain Pasture.  Can’t wait to see them in bloom! 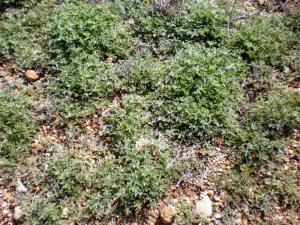 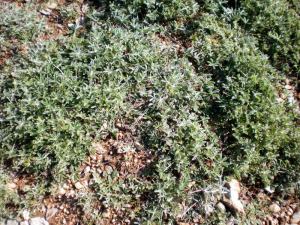 Here is a photo of a blackberry plant that my husband planted a few weeks ago, and the next photo is of a blackberry plant planted last year about this same time.  It is amazing what a year’s growth amounts to!  Wow!  Maybe, we’ll get a handful of berries this year!  I can’t wait until I can make a fresh, blackberry cobbler!  mmmmmm, good!

Here is a photo of a fruit tree planted a year ago, and the next photo is of a fruit tree planted this year.  I just can’t believe they have grown this much in a year, especially with the Texas drought going on.  Due to the dedication of my husband to keeping the trees alive, he watered them twice a day, every day last summer, and he did it by hand with a water hose, the trees grew by leaps and bounds. 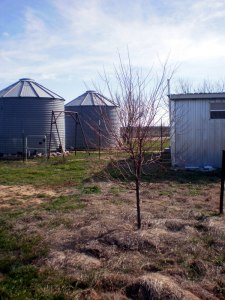 Texas climatologists have determined that Texas suffered the worst one-year drought since 1895 this past year.  Streams were running well below normal and reservoirs were at fifty percent.  The land at the Mountain Pasture certainly suffered this past year.  As my husband and I hiked through the pasture last weekend, we couldn’t believe the dead trees that we came upon.  Trees that had been here for many years are now decaying.  We were saddened to see the results of the drought, but were overjoyed to see that the rains of this month of February have put water back in our tanks/ponds and brought the bluebonnets to life and given the countryside as well as its people hope for the future.

Results of the Texas drought of 2011 at the mountain pasture pictured below:

…and then there are always the survivors: 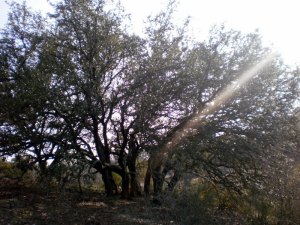 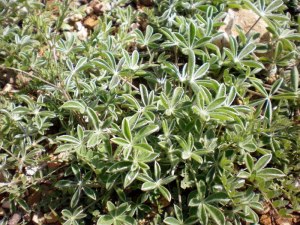 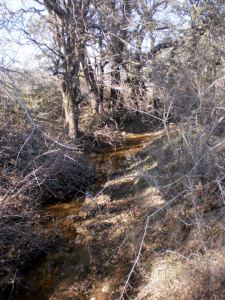 Okay, I’m always writing about how lucky I am to see such beautiful sunrises here at the Mountain Pasture in Central Texas, but this morning I saw a totally different incredible sight.  As I looked out the bedroom window just before I left for work, I noticed that there was no impending sunrise, but there was fog hanging low.  I thought, “Darn, there won’t be any cool sunrises to see this morning.”   I got in the car and started down the mountain, and just as I passed the first little tank of water, I realized what I had just seen, so I hit the brake and began backing the car.  Sure enough, there was this beautiful reflection of the nearly-full moon in the small earthen tank of water.  I put my car window down and grabbed my tiny, little camera and snapped three shots before heading on in to school.  Usually the moon blurs with my little camera, but I thought these photos turned our fairly well.  Of course, you can also see how Central Texas looks in the dead of winter……..brown and gray!  The winter grasses have turned green since the recent rains, and a few weeds are peeking out green, so before we know it, the heart of Texas will put on her Easter bonnet of every color in the rainbow, but for now, here’s the amazing moon of this morning.

I’ve been away from blogging because I’ve been on the road hunting set pieces and costumes for the one act play at school!  I’m so tired “I could spit” as Ouiser says in Steel Magnolias.

Preacher, John, was the first to identify the play, The Glass Menagerie by Tennessee Williams in which Amanda said the line, “Where was Moses when the lights went out?”  during a dinner party.  Then, Grace also identified it!

Some days teaching makes me laugh out loud.  Last Friday, one of the juniors presented me with a note.  It was a ransom note for his favorite cap.  It went something like this.  “If you ever want your cap back, you will go into science class and tell the teacher that you love his hair style and that you want to wear yours just like his.  Then, you will ask to go to the bathroom, and you will take money with you.  While on your way to the restroom, you will sneak over to the chip machine and buy some chips, make that Fritos, and put them underneath the snack machine.  When, the chips are there, they will then be replaced  by your cap.”

The student wanted to know whose handwriting it might be.  I didn’t know, but I was wishing that the writer would spend half that much effort writing his/her English essays.

A few minutes after the class got quiet and all were working diligently,  the same student blurted out,  “My cap’s been missing for three days!”

The whole class erupted into laughter.

Now,  don’t ever try to tell this teacher that kids are not creative!

The parched heart of Texas is currently receiving some rain.  It is raining right at this moment at the “Mountain Pasture”.  Hallelujah!  Amen!!  We are so thankful for the much needed rain.  Our past summer and fall were so hot and dry that we welcome all moisture.  We may have a bluebonnet crop after all! Fingers are crossed!  Come on spring flowers!

Today, I went to the County Youth Fair and discovered that Remy Wood, a junior at RSHS, had won 1st Place with her Weave Poem from English class.  Hooray and Congrats to Remy!   The students from Richland Springs just took the Livestock Show.  They had so many trophies they were going to need a trailer to cart them all home.  The students were showing their goats when I was there, and Richland Springs appeared to be taking the top spots in those events also.  I know the Mann brothers won big earlier in the day with their steers and received large trophies.   Thanks to our agriculture teacher, Gerald McKee, for doing such a great job with our students.

Wow!  What an amazing beginning to a Friday in the Texas Hill Country.  As I got in my car and headed east off the “mountain”, this photo is what I saw this morning.  I  had to stop and take a photo and give thanks to God for such an opportunity.  We can see the most beautiful sunrises and sunsets from our home.  I can barely drag myself away to go to work at the school.  It was a great day with Cheyenne Tharp winning first place in the essay contest and a trip to Washington D.C.!